PASTORAL MESSAGE FOR THE JUBILEE YEAR 2021 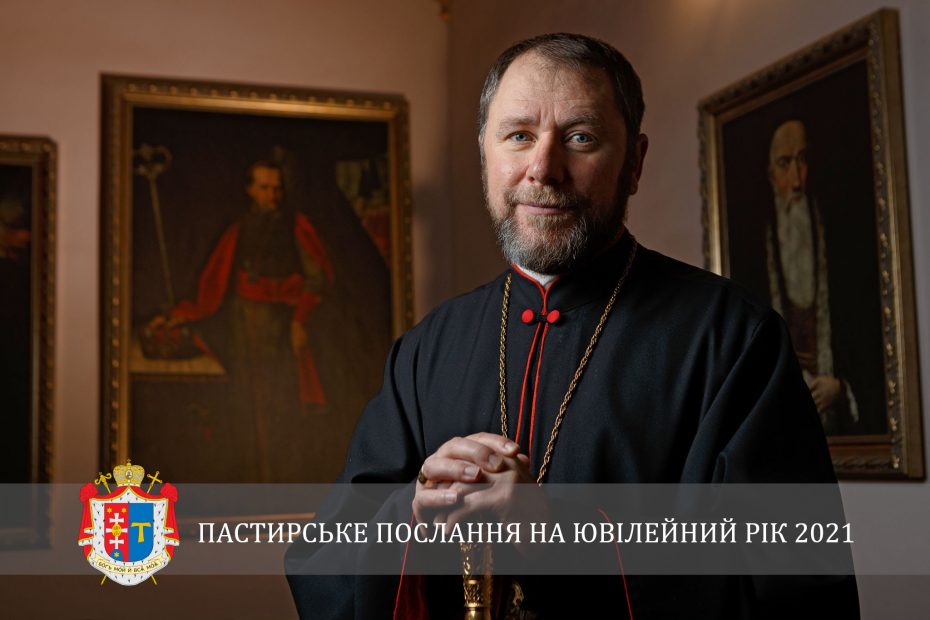 “The kingdom of heaven is like a mustard seed

that a man planted in his field.

Although it is the smallest of all seeds,

yet it grows into the largest of garden

plants and becomes a tree, so that the birds

of the air come and nest in its branches.”

DEAR SPIRITUAL FATHERS, MONASTICS AND ALL OUR FAITHFUL

On December 11, 2019, in the Basilica of St. Peter the Apostle, Pope Francis addressed the pilgrims of our diocese, led by Bishop Milan, with the following warm words: «The Church of Mukachevo is the mother of many martyrs, who with their own blood testified to their faithfulness to Christ, Catholic Church and to the Bishop of Rome.»[1]. The Holy Father, in particular, mentioned our grandparents, fathers and mothers who, during the underground, gave their children and grandchildren the testimonies of a strong, live Catholic faith. Having heard these sincere words of gratitude and support, our eyes were filled with tears of joy and pride for our diocese. The papal hymn, so inherent in our tradition, sounded over the tomb of the Apostle Peter on this day in a particularly powerful and kind manner…

St. John Paul II in his Apostolic Letter in honor of the 350th anniversary of the signing of the Uzhgorod Union said to all of us the following words about our history:

«Very quickly the impetus given by the Florentine Ecumenical Council (1439) reached the Carpathians, and overcoming some initial difficulties, became concrete in the Uzhgorod Union. This was the Gospel grain of mustard, which, sown in the fertile land of Mukachevo, eventually developed into a tree, the shade of which gathered a large group of faithful of the Byzantine tradition. Taking into account this reality, on September 19, 1771, Pope Clement XIV, by the Apostolic Constitution Eximia regalium principum approved the Greek Catholic Diocese of Mukachevo, the seat of which was moved to nearby Uzhhorod a few years later. .»

The fertile land of Mukachevo, spoken of by the Pope, is a strong faith in the Lord Jesus Christ of our ancestors: great-grandparents, it is their sincere love for the Holy Mother Church. We know that the history of our Diocese dates back to the time of the evangelical mission of the Thessalonian brothers of the holy equal-to-apostles Cyril and Methodius. However, for centuries our bishops were subordinate to and dependent on the archbishop of Eger. The path to church independence and recognition was very difficult and thorny. St. John Paul II notes: «the events that followed the signing of the Union were filled with suffering and pain. Nevertheless, the Diocese, first fortified by the work of Bishop George G. Byzantium, underwent significant development in the period initiated by the great Bishop Andriy Bachynskyi.»[2]. We can add to these words of the Pope that the great apostle, distributor, founder and first bishop of the Uzhhorod Union was Peter Parthenius Petrovič. The well-known historian Father Mykhailo Latsko TI calls him a “man of God’s providence” because it was he who, after Vasyl Tarasovych, who endured unspeakable oppression and suffering for the sake of unity with the Catholic Church, took the fate of the newly born union into his own hands, preserved it and later flourished. Now, let’s look at the text of Pope Clement XIV’s Bull on the canonization of the Mukachevo Diocese, which was and is of great importance to us. The Pope’s first words speak of the reason which prompted him to elevate our Church to such a high level:

«The peculiarities of the tsarist rulers in relation to the Catholic faith are sincerity and piety, because in the Apostolic Basin they take care of its unity and stability on their own. It calls our hearts to respond to what they piously and spiritually ask for the greater glory of God… »

The Pontiff speaks of the request of Empress Maria Theresa to affirm the canonical independence of our Diocese, thus emphasizing the great spirituality and love for the Church on the part of the imperial family. The famous historian Jean-Paul Bled, professor at the Sorbonne in Paris, in his work “Maria Theresa, the founder of the modern state”, describing the life of the Empress, testifies, in particular, to her deep piety, devotion to the Catholic faith and sincere Marian piety. For example, Maria Theresa received her First Solemn Holy Communion in the Austrian folk shrine of Mariazell and took part in the Divine Liturgy every day.[3].

By the Eximie Regalium Principium, the Holy Father Clement XIV removes the Diocese of Mukachevo from direct subordination to the Roman Catholic Bishop of Eger, and solemnly awards the city of Mukachevo with Episcopal honor for the spiritual good and salvation of human souls:

«We, after deep consideration of the request of Maria Theresa, Queen of the Apostles, and reflecting on how the Lord endowed with special graces, united Ruthenians of the Greek Rite, foreseeing their spiritual good and the salvation of their souls, on personal initiative and with full confidence, with the fullness of our Apostolic authority we adorn Mukachevo with the title and honor of the Episcopal city, and therefore let all the united of the Greek rite rejoice in this full episcopal jurisdiction in the city of Mukachevo and in other cities… »

It is also clear from the text of the Papal Bull that Maria Theresa considered it her royal duty to take care of the unity and stability in the faith of all Christians living in the territory of her Empire. This sincere faith and conscious piety of the Empress, indeed served the greater glory of God. This is vividly reflected in the history of our Church: how many giants of the spirit, learned men and finally holy pastors and faithful brought up our Silver Land… St. John Paul II speaks well of this, noting the heroic testimony given by the clergy and the faithful of the Diocese during the brutal persecution of the Soviet communist system.:

“Recently, unfortunately, it [the Diocese of Mukachevo] has once again been called, in many of its members, to walk with Christ the painful path of Calvary in persecution, in prisons and also in the highest sacrifice of  life. This testimony, sealed with blood, was given by the pastor of the Diocese himself, Bishop Theodore Romzha, who did not hesitate to lay down his life for the sheep of his flock (compare. John. 10,11)[4].»

The Catholic Church, the Pontiff emphasizes, cannot forget this fiery testimony  faithfulness to Christ and his Gospel, which were kept by the pastors and faithful of our Church:

«They are a precious legacy of the Greek Catholic Church, which emerged from the Uzhhorod Union. The children of the whole Catholic Church accept, moreover, with respect this example and value as a treasure such a wonderful lecture of fidelity to the truth of Christ. For its, with a touched heart, they thank the Christians of Mukachevo and all those who showed a willingness to sell all their property for the sake of the precious pearl of faith (compare. Mt. 13, 46)[5].»

In the light of the Second Vatican Council, the Eastern Catholic Churches, as St. John Paul II testifies, must fulfill their noble duty: to be a light on the path to unity with non-Catholic churches. This mission requires from the Eastern Churches a renewed, complete, sincere impulse to the formation of future pastors. To be a light to others means to be open to others, to see our neighbors who are in material and spiritual need. Only through concrete gestures of charity, as well as through lively pastoral work, we will be able to pass on the foundations of the Christian faith to our contemporaries and future generations. The leaven of the Gospel Word must grow in our daily lives. Only in this way  we will be able to grow together with the Universal Church, will we be able to witness to the faith on the threshold of the new Christian millennium. That is why catechesis and new evangelization in our parishes should be the main task, and the celebration of the Divine Liturgy should become an inexhaustible source of the spiritual life of each of us.

Thinking over the beautiful and profound testimonies of our Diocese and its formation,mentioned here, I want to encourage all pastors, monks and nuns, all faithful to deeply experience the Jubilee events that we are celebrating this year. First of all, it concerns our spiritual life: encouraging each of us to pray sincerely and to convert our hearts.

“The Mother of God, who at the foot of the Cross received from her Son the task of leading the Church with maternal care; The Queen of Peace, who allowed the eternal Word to pitch her tent among us to reconcile us to the Father; May the Virgin of Pentecost, through whose intercession we await the renewed outpouring of the Spirit of holiness, make her kind presence felt by these brothers and sisters of ours, who are preparing to celebrate such a great anniversary with joy ”- St. John Paul II.

With these words of prayer to the Mother of God, from the bottom of my heart, I give you all my Apostolic Blessing!